So what do sex, samosas and vibrators have in common?

Also included on the blog is a recipe for samosa’s (recipe below). I should clarify, my version of samosa’s, not authentic, but still tasty and after reading Jasmine’s SEX AND SAMOSAS book (which I highly recommend)…..samosas are real fun and sexy to eat.

Plus, Heidi Wiley is back and gives us her thoughts on Jasmine’s book. 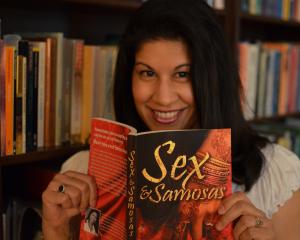 I get asked that question almost as much as “What is a samosa?” A samosa is a South Asian snack that is triangle shaped and stuffed with potatoes and peas, chicken or spinach.

And how do the two go together? Now that’s a more difficult question to answer.

As time moved on I found myself standing in front of a room full of excited women espousing a great sex life weekend after weekend but going home to a toxic, sometimes hostile relationship I felt I was forced to stay in because of cultural pressures and a misguided idea of commitment. Only a few weeks after moving my entire life to be with my boyfriend, I made the decision to leave him. A few months after the break-up I was called to present at a Bollywood Bachelorette party.

The young bride-to-be was a stunning second generation South Asian woman, young and full of excitement about getting married to her perfect Indian prince. He was a doctor, she was a nurse and the ring on her finger was worth more than a small car. To me, she represented every dream I thought I had for my future and every bitter reminder that none of them would ever be realized. As the hostess passed around a plate of samosas, the idea of “Sex & Samosas” started to brew inside me.

“Everyone wants you to get married,” I started to rant. “They say, ‘Get married. Have children. Buy a house. You’ll be happy’ but no one in our culture really cares if you actually are happy spiritually, emotionally or sexually in that relationship. Just marry them off, hope for pretty grandchildren and move on to the next victim. ”

Sixteen sets of dark brown eyes stared at me in disbelief. The bride looked nervous and more than a little annoyed. I knew in my heart that it was the wrong time and place to stand on my soap box and expose my own bitterness and anxiety. It was, after all, a joyful occasion with red balloons, snacks and pretty white paper wedding bells hung between sari fabric on the party room walls.

I had something to say and they needed to hear it.

And write I did. Twelve hundred words in total.

I knew my first draft wasn’t the next “Moby Dick” (favourite words in titles aside) as it wasn’t surprising to me I would release all of my frustrations and angst into a word document. I had been writing since I was five years old. In high school I wrote a play. It was a modern take on the classic Cinderella story. Only in my version, the heroine was ethnic. She loses a running shoe instead of a glass slipper and in the end, the Prince finds her but she leaves him to run off and start her own company. It opened to rave reviews even if senior faculty closed the show after one night because the content “wasn’t suitable”.

Six years after starting “Sex & Samosas” I launched it and hoped for the best. My novel addresses gaining confidence in yourself, asserting your own identity and learning to find balance between personal, cultural and societal expectations. Basically, all of the issues I wrestled with after I left that toxic relationship not only with my boyfriend, but with myself. From the letters and emails that I’ve received since publishing my novel it seems that many people can relate to my protagonist. Writing this story began as a means to deal with my own personal issues and to provide access to information about sex and sexuality in a palatable and non-threatening way. If along the way, you find out what a samosa is, that’s a bonus.

If you never look at the triangle pastry the same way again after you read my book, well, that’s a whole other story.

Learn more about Jasmine by checking out her WEBSITE.

Leena was less than enthused when a friend insisted she accompany her to a toy party. It wasn’t that she had anything against Barbies or building blocks; it was more that these toys were for grown-ups and she wasn’t sure if this was what she needed to spice up a sex life with her husband that was still loving but had become routine.  After some wine and a great sales pitch, Leena decided that maybe with a little instruction and some AA batteries, these feminine power tools could provide more pleasure than an Easy-Bake Oven ever could.

Using the first person narrative, Author Jasmine Aziz has created a story about a woman who at 32 is still unsure of her own sexuality, but is ready to test the boundaries to strengthen her relationship with her husband and discover more about her own desires in the process.

This is not only about a woman’s search for pleasure, but how being a part of two different cultures affects her view of intimacy, family, and  everyday life all with a great sense of humility and a healthy dose of humor.

This sexy story is well-written, fun and relatable to women of all cultures who want to get the most out of their marriage and have new experiences along the way. 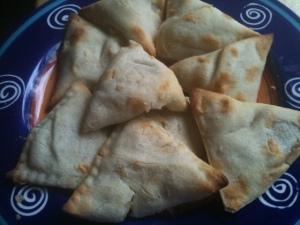 2 cups swiss chard (chopped up in small pieces and blanched)

**Note** You can use peas in place of swiss chard.

Heat pan on stove to medium heat, then add oil.

To pan add: onion, garlic, curry powder, salt & pepper and cook until softened and a light brown (about 10 minutes), and stirring the whole time.

Add the potatoes and swiss chard and stir, cooking for another 2 minutes to meld the vegetables, potatoes and other ingredients.

Roll out the pie crust and cut into 6 triangles.

Add a heaping tablespoon of the vegetable mixture in the center of each triangle.

Fold over and pinch the seams to seal, so they resemble a triangle when folded.

Line a baking sheet with parchment paper (or use a non-stick spray).

Bake in oven for 25 minutes, until golden.

Serve with either a salsa (in which case, you are infusing a Mexican and East Asian dish) or with your favorite chutney.

Mardi Gras in a Crockpot

For the love of harvesting