Things I learned from my dog

Please join me in welcoming, Nancy Lauzon, author of the Chick Dick Mysteries, and her fur baby, Sam. 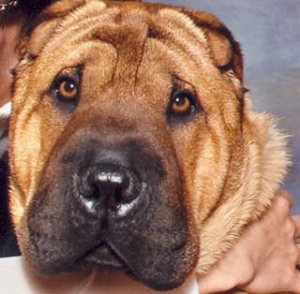 1. Wrinkles define who you are.

Wrinkles, freckles, age spots, flab — all of that stuff — means that you’ve spent more time than others exposing yourself to sunshine and lots of good things to eat. I inherited good skin from the women in my family, and don’t have too many wrinkles yet. As for the rest, I try my best, but I’m never giving up chocolate.

I know it’s pure saturated fat. I try not to eat too much of it, or think about where it comes from, but dang, there’s nothing like a few slabs of crispy bacon to go with your scrambled eggs and coffee on a Saturday morning. Sam isn’t allowed bacon either, but once in a while he gets a tidbit when he smells it in the kitchen. He hoovers it off my hand so quickly, I can’t tell if he likes the taste.

3. Birds are fascinating
For very different reasons. Sam would like to kill them. I love to watch them at my feeders and in the bird bath, splashing and shaking their feathers. A great way to de-stress.

4. Never give up
Sam is VERY stubborn. He injured his ACL, and is currently wearing a brace. He’s not allowed to jump up on things or climb stairs. The living room couch is off limits, and we’ve blocked the staircase with a card table. His favorite place to sleep when we’re out of the house is our bed upstairs. He spends a lot of time huffing and grumping about the fact that he can’t nap where he usually does. After a dozen attempts, he finally managed to move the card table aside and I found him on our bed yesterday, as usual.

5. Follow your dreams
Sam loves to chase trains, squirrels, rabbits — basically anything that moves. Even with an injured knee, I know if I unsnapped his leash he’d be off and running. It’s instinctual for him to chase what he was born to chase. I admire his determination. I think about that when I’m frustrated or discouraged.

6. Cesar Milan is cute
The Dog Whisperer has helped me cope with some of Sam’s ‘issues’, like barking at the mailman or trying to eat my neighbour’s face. Along the way I’ve come to love the show and its fearless star, Cesar.

I know it’s corn syrup, fat and artificial flavors. Sam doesn’t care, so I don’t. He definitely likes the taste.

Nancy Lauzon worked nine years on a hospital ward as a cardiac nurse before the night shifts turned her into a zombie. She got a day job in health promotion and began to write health-related articles for magazines and newsletters.

Life threw out a few curve balls, and to relieve the stress, she began to write fiction part-time. Five years later she sold two different manuscripts to two separate small-press publishers, using a pseudonym. She retired from nursing in 2003 and began to write full-time.

She is now the indie author of three Chick Dick Mystery novels, inspired by her early love of Nancy Drew Mysteries.

3 responses to “Things I learned from my dog”