Please welcome, Maer Wilson to the blog as she talks about her magical fur babies and introduces you to her latest fictional work, GHOST MEMORY. 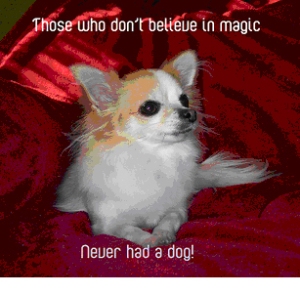 Dogs don’t even have to work at being magical. They just are by their very natures. The above picture is my long-haired chihuahua, Tréa. She weighs in at 4.3 pounds, is 13 years old and has been one of the joys of my life.

Tréa was a therapy dog for the first eight years of her life. She worked her magic with the elderly at an assisted living home. She also did many special appearances at events and festivals. She got so good at posing for the camera that now all you have to do is get the camera out and she will sit and pose. Even if it’s not for a picture of her. But you’d best make sure you take one of her because she expects it.

These days she’s more a pup of leisure, but she’s still the mascot for our local Earth Day celebration. She’s been featured in local papers and magazines, touting her volunteer hours, which topped over 200 before she semi-retired.

Chloe is my rather large miniature poodle. She’s 5 years old, 28 pounds, super smart and our protector. I’m telling you, no one can come onto our property without her letting me know. In fact, she lets me know when people walk on the street, even though our house is set pretty far back from the road. She’s a terror to the bunnies, quail, lizards and any other creature who might dare come into her yard. Fortunately, she no longer brings me “presents,” although we had to have several chats about that.

Chloe also goes to Earth Day and helps Tréa greet people. Both of my girls are very good with the public, allowing even little kids to pet them. Since both are very soft, they get petted a lot.

One of Chloe’s favorite things is to ride in the car with the top down, but only if I don’t go above 45 mph. Anything over that and she wants the back windows up. Tréa is not as fond of the car, but she tolerates it.

Pet safety in the car is one of my big concerns. Both of my girls have car seats and wear harnesses which are hooked into their seats.

Whenever I see a driver with a pet on their lap, I cringe. All I can think of is what would happen if the driver were hit hard enough to deploy the airbag. I know I used to let Tréa ride on my lap, until I realized she could be killed if the airbag deployed. I bought her car seat immediately and she’s been in it for almost all of her life.

Also since many dogs like to stick their heads out the car window, I highly recommend using protective dog glasses. That will prevent flying debris from damaging their eyes.

Any time we have the top down, the girls wear their Doggles, to protect their eyes. My magical girls are just too special to take any chances, so their safety in the car is critical.

So, what pet stories do you have?

I’d love to hear from other pet parents. 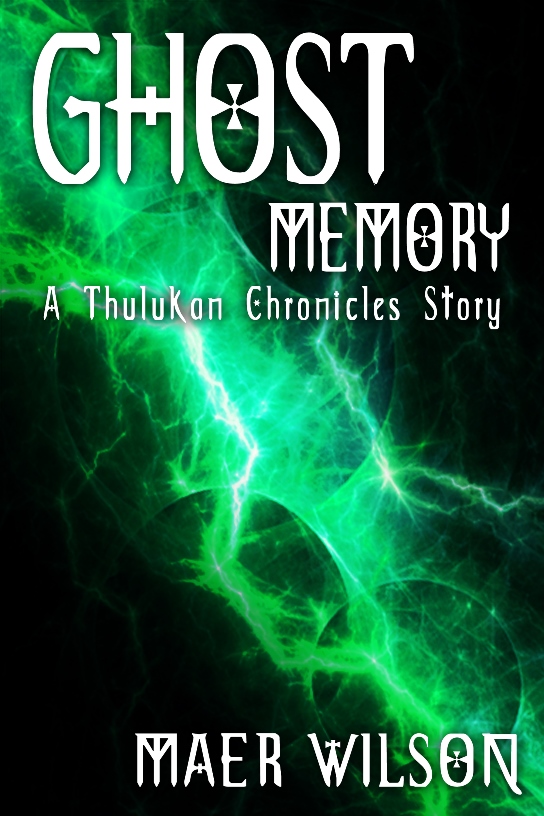 La Fi is not having a normal day. She broke someone’s nose, embarrassed her fiancé, Thulu, and now a dead guy is on her doorstep. Although seeing the dead is not unusual for the young medium, since she and Thulu regularly deal with the supernatural. Thulu can find anything that’s lost and the amnesiac ghost is missing money, along with his memory.

Peter Swanson used to stash money throughout his San Francisco home. Now he can’t remember his hiding places, and his aging partner needs the money. That’s not normally a problem for Thulu, but some of the money is missing from the house. Thulu and La Fi must broaden the search for cash long gone, and that could prove tricky in more ways than one.

After a successful career being other people, and later teaching others the many tricks of that trade, Maer Wilson has decided to be herself for a while. Turns out she’s a writer. She’s always loved stories, especially fantasy, mystery and sci fi.

Maer was born in the Year of the Dragon and has a dragon-themed room in her home, but sadly no dragons in the back yard. When she’s not writing, Maer plays online video games, teaches college and reads. She also co-hosts the literary podcast, “MythBehaving” and writes for two gaming fansites. She lives in the high desert of Southern Nevada with her two dogs, a chihuahua and a poodle.

Relics is her first novel and is currently available at Amazon and Barnes & Noble. You can find her new prequel “Ghost Story” at Amazon and Smashwords.