“Warning! Asses directly in front of you may be closer than they appear.” 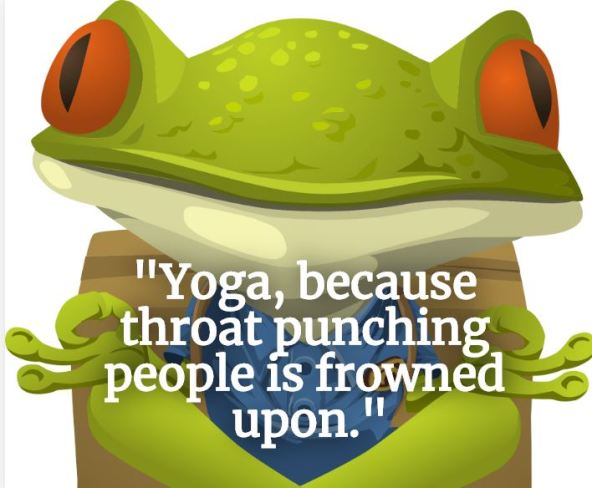 After a long absence—and by long, I mean over two years—from any type of Yoga, I’ve re-entered the twist and sometimes shout world of attempting to perfect the tripod headstand with Lotus legs (hey, one can dream).

My bestie and partner in many crimes (and may I add, great writer and Podcast personality. Jasmine Aziz) and I have partnered up as Bendy Accountable Buddies, re-entering the Yoga world of hurt together (this program is called Yoga Burn, and baby, does it burn).

With that in mind, I am re-blogging the following post of the time I first entered the Zen world (although, with me, finding my Zen meant figuring out how to wake up my left foot after it fell asleep).

I hope you enjoy this re-posted blog.

A few months ago, I decided to try anti-gravity yoga. Great fun until you injure your shoulder and are told to take up a less strenuous yoga class.

I did love being upside down and pretending I was part of the Cirque de Soleil troop. However, I had to give up that class and at the anti-gravity yogini’s suggestion, I now attend a Hatha Yoga class.

Hatha Yoga is all about breathing exercises, meditating and gentle poses.

Okay, I can do that. Easy stuff. Right?

I was off to Yoga class armed with a fierce determination to stay focused during the whole class. I was raring to go, equipped with the mandatory (and may I add, cool) yoga kit:

A sticky pink yoga mat—sticky as in sticks to the wooden floor. Not sticky as in—when a person smuggles in a smoothie instead of water inside their water bottle and said smoothie is accidentally knocked over. (It only happened to me once)

Two blocks—used to lean on, not to build a little bridge for any tiny ants that may have slipped into the room.

A bandage—don’t ask, it’s rather complicated.

A chiropractor on speed dial—–you can ask, but you won’t believe it.

My mind was in focus mode. My gear was all organized and I sat and waited for the Yogini to start the class.

What the hell is a third eye? 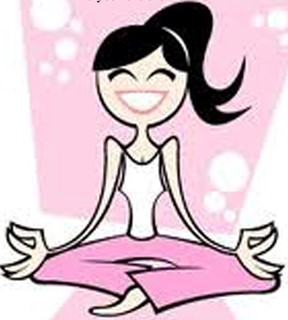 I noticed Yogini got new tattoos on her arms. She now had what they called sleeves on each arm.

That must have hurt like a mother…wait, don’t let mind wander…stay focused.

I looked out the window in front of me, instead of trying to figure out what Yogini’s new tattoos symbolized.

As everyone was getting themselves organized, Yogini looked around and commented that there were many new faces.

Yogini has great powers of observation, because I hadn’t noticed any new members, but then again, I keep to myself in these classes…being an introvert and all.

Yogini asked if anyone had any questions before we started.

As you probably have all experienced, there’s always someone in any class that takes this question literally. Their expression usually looks like a question mark at all times.

Sure enough, the lady on my left raised her hand.

Cripes, lady, we’re not in school, just ask already. I have meditating and focusing to get into.

Yogini nodded to her and Ms. Question Mark started off by gushing on how much she loved Yogini’s methods and how this was the best class and…that’s when I. Checked. Out.

I thought about what I wanted to accomplish today, mentally making a check list.

That done, I focused on Yogini’s arms and her new tattoo’s, trying to figure out what they were.

There were stars (I think), a dinosaur (I think) and an upside down cross (I think).

One thing I did know for sure was that they were all the same color in different shades.

The thing that looked like a dinosaur was a neon blue…okay, not neon, but I’d never seen a tattoo that bright.

The color reminded me of the Smurfs.

I know what you’re thinking; how do dinosaurs and Smurfs compute?

The Yoga studio is across the street from the movie complex and through one window I could see the huge posters advertising movies.

This got me thinking.

Should the Smurfs be a kid’s movie?

There’s a village filled with boy Smurfs, baby Smurf and Papa Smurf. Then you have Smurfette.

This is where it gets dicey…who is Baby Smurf’s baby daddy?

Hollywood needs to reevaluate what is deemed appropriate for children.

Ms. Question Mark interrupted my deep thoughts, when she said, “Thanks for the explanation.”

“As I said,” Yogini answered. “It’s nothing to worry about. It’s common and in time, it will pass.”

Huh? What’s common? What will pass?

“I sure hope so,” the woman with the matching Lululemon yoga outfit, mat and water bottle said. “We were talking about this before class, because it also happens to me.”

Ms. Lululemon smiled at Ms. Question Mark (BFF’s for sure), proud they talked about this. Whatever the hell this was.

“It was a good question,” Yogini said, and glanced around the room. “Anyone else find this a problem?”

I looked around and it seemed everyone was nodding.

Should I nod as well? Shit, what should I do? I’ll stand out if I don’t nod. I’ll be the only one who doesn’t find whatever the hell this is a problem if I don’t nod.

Dammit, why didn’t I pay attention? Damn Smurfs, it’s all their fault.

I don’t go in for sheep mentality, but I didn’t want Yogini to think I wasn’t paying attention. Again.

No, not only did I nod, I enthusiastically said, “Yes. It’s a real pain in the ass when that happens, isn’t it?” And smiled at Ms. Question Mark to let her know I understood her problem. (Which of course I had no frickin’ clue).

Ms. Question Mark shot me such a filthy look, that if looks could kill, I’d be crossing over toward the white light.

The Yogini said, “Oh, it’s the first time I ever heard that it caused pain.”

I kid you not; I heard a collective gasp and then more than a few people laugh.

Oh, shit, what the hell did I admit to?

Yogini then looked concerned. “We can discuss this in private after class.”

Yeah, like that’s going to happen. I’m running the hell out of here after class.

Some people were still chuckling and it was beginning to piss me off.

Well, actually, I was super pissed at myself for not having more patience to listen to Ms. Question Mark’s query.

Yogini asked us all to settle down and then started the class. “Close your eyes. Clear your mind. Inhale deeply. Hold your breath in for 60 seconds and focus your energy at the third eye and mentally chant ‘Ohmmmm.’”

What the hell is a third eye? Maybe that’s what they were asking about? How the hell do I chant Ohmmm, when I’m holding my breath for sixty seconds?

I know I live in the State of Confusion when attending these classes, but today I was residing in The Universe of Confusion.

I closed my eyes and chanted, “Ohmmmm…”

Then she clicked her tongue as if I was annoying her.

“Take in your breaths from your core,” Yogini said. “Then slowly exhale.”

The BBF’S were really into this.

Ms. Question Mark was going at it so loud that I was sure she’d be needing a cigarette after class (or chocolate covered jelly beans—because you know not everyone smokes after a good…..O….Ohhhmmm).

The lady next to Ms. Lululemon, kept turning around, staring at me, looking like she had a hard time keeping a straight face.

Why? I have no clue. I swear I did not express the above mentioned thoughts about the BFF’s out loud.

Yogini then instructed us to slowly stand for downward dog pose.

Cripes, one of these women in the room obviously didn’t read the sign that says: No scent makes good sense? I think I’m going to puke.

Wait, did I just say that out loud? Shit. Okay, I can cover this up. I’ll smile and pretend it wasn’t me.

They really should have a sign in this room that says, “Warning! Asses directly in front of you may be closer than they appear.”

I’m such a bitch.

Yogini then instructs us to slowly stand straight and to turn to the left.

As I experience head rush, standing straight, Ms. Question Mark turned to me and whispered, “I was asking a serious question about flatulence. You didn’t have to be sarcastic with your pain in the ass remark.”

That’s what she was asking about?

Okay, let me stop here for a minute.

Those of you who know me, know that I can not, will not ever; say, type or even want to read THAT four-letter “F” (no, not Fuck, I can say, type that all day long) it’s “F” word used for flatulence (it’s one of my quirks), much less participate in a discussion about it.

I did not respond to Ms. Question Mark, except to indicate that she should turn to face the wall.

We were instructed to bend over slowly and walk our hands in front and be mindful of the person in front of us.

While doing this, I remembered the tail end of the conversation and Yogini’s answer of, “This too shall pass.”

I burst out laughing. Well, not the loud burst of laughter. The quiet laugh.

Obviously, I failed at the quiet laugh, since she heard me.

“It happens to many of us here,” Ms. Question Mark said. “Before class we were discussing it and we wanted to know when it would stop.”

Cripes, lady, how the hell do you pass anything with that stick up there, anyway? Lighten up.

“I apologize,” I said. “I was pretending to know what you were all talking about, because I wasn’t paying attention. I had no clue what the question was.”

Now I’m wondering why didn’t Yogini tell her to shush it, like she does to me when I accidentally hum along with the irritating, supposedly soothing music?

Just so you know, I think I jazz up that annoying music so people don’t fall asleep.

“I’m facing your behind for this pose and you don’t find any of this funny?”

“Okay, I’ll stop,” I said. “And I really am sorry. Can I buy you a smoothie after class to make up for it?”

“No thanks, just stop laughing. It isn’t funny.”

Seriously? She doesn’t find this funny?

We continued with the poses, and I really did pay attention and managed not to fall over.

We were standing, doing the eagle pose, when the air in the room changed…as in…someone needs to open a window.

The elderly woman in front of Ms. Question Mark turned and gave us both a wide smile and said, “See, when you get to be my age, you don’t question it or give a damn. Now that I’ve cleared out your sinuses, do some yoga and stop your yammering.”

Her friend (elderly woman number two) beside her nodded in agreement.

Elderly Woman Number Two obviously didn’t give a damn either.

It was like being plunked in the middle of that scene from Blazing Saddles.

Elderly Woman Number two cranked up a smile and said, “Breathe in ladies.”